Yikes! It's been a while on this site since an update, so I figured I'd post something while I've got the chance (I got up early to run, but the howling wind and chilly temps cancelled that--I'm soft that way).
Chippewa 50k is back on, apparently...which means it's back on my schedule as well. This probably means the Navarino 26.2 won't happen this year for me (it's the following weekend) in all likelihood, and I'm sure a lot of the familiar faces won't be at Chippewa either (they'll be at Zumbro), but I really want another photo as a race reward, so I'm thinking I'll be there! It may be a "camping" trip at the Chippewa Moraine parking lot in the Suburban...and we'll see what happens with the weather--Early April can be a tricky time of year.

What's also official is that a marathon is coming to Elkhart Lake, along with a bunch of other events in what will be a great weekend! I would love to break 3 hours at that run, but after seeing the course map, I'm not sure it's possible because the RD has included several gut buster hills on the course. Then again, with a couple hilly 50k's in my future, anything's possible!

I'm also considering the Ice Age 50K (why not, right?) this spring...pending spousal approval. It would be a great chance to see a bunch of friends--both local and from blogger world--and it would set up a pretty epic spring for me:

I'm afraid to tell my family about this schedule--they already think I'm nuts. Ellie's is pretty much on board, as she's seen first hand the difference in me with and without running. The only caveat from her is that my schedule can't interfere with our Bradley Class schedule, and so far I'm good to go!

Speaking of Ellie and the Lil' Giebler, things have continued to go great! Last week was our ultrasound appointment, and based on Lil' G's size, we're looking at mid May--I'm not giving the specific date as we've got a pretty big "guess the arrival date" contest going on at my office. We're also not finding out the gender...that'll be a surprise too. Ellie's belly button has completely flattened out and she's feeling the baby's acrobatics more and more...what an absolute treasure this time is! 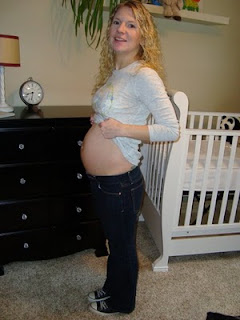 I also spent last week in Winter Park, CO having a blast skiing! A friend took a killer spill into about 4 feet of powder... 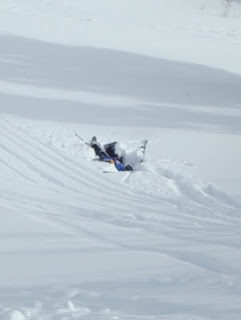 ...and I had a blast skiing terrain way above my ability level... 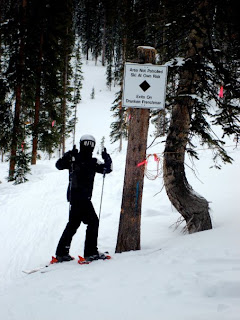 it's going to be a year you'll never forget that's for sure.

i wouldn't plan on any races post-baby expected arrival date. the first 6 weeks you get no sleep at all. and i know everybody tells you this, but it really does change your life completely. i tell people it will ruin your life as you know it now. that sounds harsh, but you will not want to run a race after the lil'g is born. for at least the first 3 months or so.

Hey, Ellie and I have the same stomach now!

I might do Chippewa; it depends upon a bunch of other stuff - though nothing as much fun as giving birth...

CJ- Yeah, that last marathon is after the due date, but I figure newborn sleep deprivation will aid in me realizing the fatigue experienced at Mile 23 of a marathon is NOTHING!

Steve- I really hope you're there!

Baby Gender - Crackerjack/Surprise Inside approach is definitely the way to go! Much more fun that way. :)

Sub - 3:00 hours with gutbuster hills just makes it that much more rewarding....

Exciting times! Love the ski pics in Colorado. I tried snowboarding a few weeks ago and definetly decided I better stick to the skis...

I agree with Caroline John: Don't plan much for immediately post-baby! Not so much because you'll be fatigued, but you probably won't want to spend the time away from your new family.

He's right: Everything changes. However, you won't truly understand that until it actually does.

Don't listen to CJ! Throw the kid in a dog cage and you'll be good to go! They need to learn young. Only playin!

I say GIRL! I say GIRL! And if it is, you are SO in trouble ;-) Awwhhh the Mrs looks super cute!