I got down to the check-in at about 9:15 on Friday night.  I had opted to sleep in a tent at the start/finish area.  I was surprised at how many tents were already there, and after talking to a couple people, this 'tent city' was actually about half of it's normal size.  When checking in, I received a wristband and a tag for my tent.  I was warned that the resort (Devil's Head Resort) security would be checking to make sure there was no illegal camping.  I half-jokingly asked if they were going to knock on my tent that night to make sure I had my wrist band on.  It just seemed odd, but I went with  it.

I ended up being  the 4th tent from the start/finish area, as I wanted to be close to my car (which had to remain in a seperate designated area).  I got the tent set up, was inside by 10, and reading by 10:20.  It was pretty quiet, save for the bullfrogs nearby.  The "site" was just a big field that they had mowed down...sorta---still LOTS of tall grass and tall grass clippings everywhere.  No big deal, though, as I only paid $10 for this little patch for my tent, and I slept decent enough.

I woke up the next day at 4:30 to my alarm and started preparing.  One can of Chicken & Stars.  One bottle of Slim Fast.  Water.  Breakfast of Champions.

Nutrition-wise, I went with a single bottle of nuun Kona Cola and about 400 calories of CarboPro.  I had some SCaps stuffed in another pocket.  My Patagonia Strider Pro Shorts are my all time favorite.  I had a Patogonia shirt on, Smartwool Socks, and my trusty Nike Terra Kigers.  Unfortunately, the Terra Kiger 2 is a DIFFERENT shoe, which sucks once this last pair of Terra Kigers finally start breaking down.

Last year I tried a similar strategy.  I started with a bottle of Carbo Pro, then ran with a ziploc bag of more powder to mix in at some point.  I never actually used it, and overall my nutrition and race was kind of a wreck last year.  I was hoping for better results this year...despite kind of using the same strategy, sans the extra powder.  Typing this now, it doesn't seem to be very logical...

The race starts with about 2.5 miles of climbing.  I kinda sort myself out towards the front, and find my pace matches pretty well with Bruce, who I have run numerous races with in the past.  There are some speedsters in front of us and others yo-yo-ing on the uphills.  Eventually, by about Mile 10, Bruce and I are at the front of the field with one 50 miler (Logan) in front of us.

The course this year didn't take the most direct route up the East Bluff, which last year involved serious rock climbing and bouldering.  Instead, we took a much more gravel road around the bluff then popped out on top.  That segment of trail on the top of the bluff is just incredible.  Just google Devil's Lake East Bluff and you'll get the idea.  It's magical...and I don't use that word lightly.

After the Bluff, we drop down in to the "Bug Pit" area which is a big open meadow.  Because we didn't use the ski hill for the first 5 miles of the course, we had an extra 5 miles of meadow.  Not bad, not my favorite, and if it was hot, it'd be miserable.

This entire time I'm following Bruce.  The meadow out-and-back is about a 6 mile stretch and as we returned to the Conservancy Aid Station, I noted that Bruce was starting to slow on the uphills.  I had been waiting to 'make a move' after the meadows, where we have a ~2 mile climb through the woods from mile 22-24.  But, Bruce continued to slow in the meadows, so at about Mile 20, I moved past him and tried to pick up the pace a bit.

From that point, I was able to run all of the flats and downhills, and a surprising amount of the hills.  I managed to put 11 minutes in to the lead and came down the final 2 mile downhill relatively steadily.  Even managed a smile for Shelley as I approached the finishing chute. 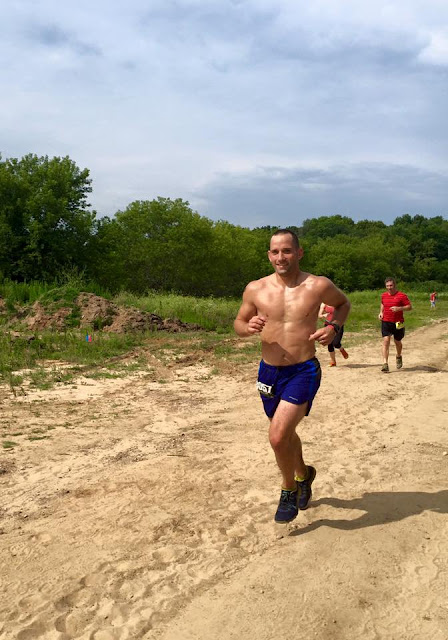