I'm about 3:20 in to the run and have reached "The Wall."  I'm hot and dripping with sweat.  As I try to push my arms in to my knees and grunt up this steep section, my hands are slipping off my knees--both surfaces are soaked.  I slow (even more) for a second, and consider crawling up this damn hill.  I think about my finish time...last year was 3:37, and I was hoping for 3:35 this year.  That ain't gonna happen.  Can I finish in 3:40?  I know a lot of runners who signed up for this run were hoping to run 3:40.  They're probably gaining on me because I...can't...get...up...this...damn...hill.

And it's not even the last steep hill before the finish.

Looking back, I'm not sure what to make of this run.  Ever since surprising myself with a win and a 3:37 finish last year, I have been looking at this race and hoping to run well.  Yet, most of my running this year has been a bit disappointing.  I was 10 minutes slower at Ice Age.  I was 9 minutes slower at the Maritime Marathon.  All in all, though, I think I ran a smart race.  I just didn't have 'climbing legs' and I think the humidity got to me.  Short story:  I finished in 3:50, 1st overall...which means I won a free entry in to next year's race.  I'll be back.

My goals for this race were pretty similar to last year:

1)  Run smart and run my own race
2)  Be able to run the flats and downhills in the last 7 miles.

Regarding those goals, I was successful in both.  I simply lost time in my terrible hill hiking, and in my much slower running pace when running.  So let's end the rambling and get to the actual report...

Before the race I shared with my crew that I was at this race to win.  I had looked at the entries and thought I had a serious chance of winning.  Not because I thought I was the fastest runner, but because I didn't see any names on the entry list of people who have actually run at Lapham Peak on a regular basis.  The marathon consists of 4 circuits of "The Black Loop" which is a cross country ski loop and is (in my opinion) a legendary loop for running.  95% of the time it's either going up or down, with very little flat running.  It isn't technical running, but if you haven't been on the loop prior to the marathon, it's gonna beat you down before that final loop.

Getting back to the conversation with my crew (my parents, as usual), I told my dad to watch the splits between me and the leader when he saw me (which would be twice on the first loop, and then once every loop from then on).  He reminded me that last year I wasn't leading until half way through the final loop, and I smiled and said that the final loop "is the only one that really matters."

So, promptly at 8, we were off and running.  One runner took off from the start and was out of sight pretty darn quick.  The race starts with about 3/4 mile flat stuff, so I found myself settled pretty comfortably in second...but first was gone.

I didn't see him again until we got to the tower, which we must climb on the first loop.  As I started my way up the tower, my dad let me know I was about 3 minutes down.  Later he'd share that the leader sprinted and bounded up the tower...while I pretty much casually hiked it.  It's way to early to put that much effort in to the run. 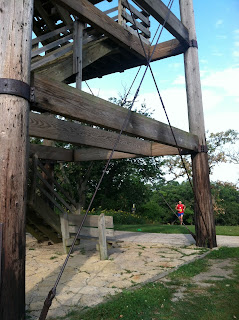 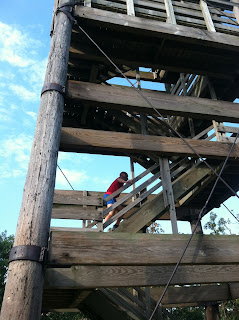 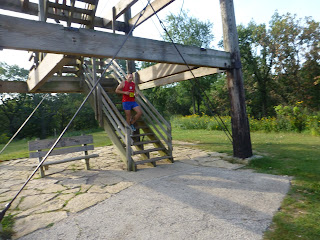 After hitting the tower, the loop enters what is called the "Big Slide" and this is my favorite part.  It's a downhill that goes on forever.  I wear Hokas at this event for this exact reason.  The extra padding lets me just bomb down the hill...although this year I bombed right out of my shoes.  Kinda disappointing, if you're reading, Hoka One One.

I came through loop 1 in about 53 minutes (much faster than expected) and still about 3 minutes down.  Loop 2 was still run all on my own, with the exception of some additional runners from other runs (a half marathon starts at 8:30, and a 10 starts at 9).  I never saw the lead marathoner, and never saw anyone behind me.  What I really focused on was getting in my calories (via CarboPro mixed in water with NUUN) and keeping my pace steady.

Getting back to the start/finish upon finishing loop 2, I was disappointed to have my dad tell me I was now 4 minutes down.  I tried to remind myself that there are still TWO loops to go, and this course can beat you up.  So, I took another bottle of nutrition, and set out for loop number 3.

During this loop I was really expecting to catch the leader, but it didn't happen.  And I knew the course was getting to me too.  While the first two loops were 53:xx loops, I was feeling the climbs and just didn't seem to have a get to get up them.  Loop 3 was 59 minutes.

The loop ends with an opening in to a valley, from which you can see across a field to the start/finish area.  As I entered this area, I was bummed to not be able to see the leader anywhere.  Man...that guy can run!

Approaching the aid station at the start/finish area, a spectator started cheering "Way to go Marathoner!  Way to go!"  It didn't take me long to realize she wasn't cheering at me.  The leader was right in front of me.  He had taken off his shirt and I didn't realize it.  As he got to the aid station, about 10 seconds in front of me, he started chugging fluids.  This surprise jolted me back in to racing, and I simply gave my mom my empty bottle, poured a cup of water over my head, and left the aid, embarking on the 4th loop, in first place.

My parents hadn't even realized what happened either.

So now, as I take off running, the mind games begin.  I MUST run everything flat.  I WILL NOT look back to see if someone is coming.  I have a feeling the early leader is pretty dejected, but as I mentioned earlier, there are a lot of guys who can run 3:40 on this course.  So...don't look back.

Finally, about 2 miles in to the final loop, I can't take it.  I reach what amounts to a switch back and take a look.  No sign of the early leader...but I see a lot of other runners.  Are they 13.1 or 10k runners?  I don't know...better assume they're gonna pass me.

So, I keep running.  I can really not go up the hills any more.  I don't know if it's the humidity or what, but I just can't get uphill.  It's becoming overcast and I can hear thunder.  I actually start wishing it would just start pouring.

Just before getting to the tower part of the loop, there is a decent uphill, and then a long, straight, flat part with good visibility.  I know at this point, that if I can make it to the tower, I have an advantage on the long downhill (thanks to my not-yet-blow-out Hokas) and that there's only about 2 miles and one more hill to the finish.  So I decide I'm going to run this flat part as hard as possible, watch my watch at the beginning, and then (finally) look back at the end of this flat straight part to see if there's anyone behind me.  It takes me about 3 minutes to get to the end of this straight stretch, and at the end, I'm beat.  I slow my pace and look over my shoulder...no one.  Phew!

But, I still ran the flats and bombed that last downhill as much as possible.  On the final hill, and half marathoner, knowing I was a marathoner, started clapping and cheering me along, saying "come on, last hill...you got this...keep going...one step...come with me...you got this!"

That was an awesome experience, and I can't thank that guy enough.  That was the epitome of the trail running community.

Finally, the home stretch.  I look at my watch and realize I'm not going to get caught, but I didn't run the time I wanted.  And I'm BEAT. 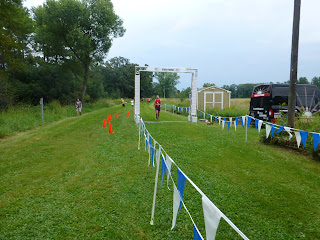 I immediately sat down, started to rest, and started getting in some calories.  I was tired, but not hurt.  And the sense of satisfaction started to settle in.  I ran my own race (crucial at Lapham Peak!), and I rand the flats and downhills all day (albeit, very slowly).

this was a GREAT description of lapham! i loved reading your race report. i run in lapham 3-4 times a week (the black route) and realized from reading your recap that the reason i've got tendenitis in my left ankle is because i BOMB all the downhills... sometimes getting my speed around a 6:50 mpm. my shoes are minimals so i'm thinking that if i'm going to be doing that on the downs i should probably get different shoes! thank you for that little "eureka" moment! i didn't run all this week (going on FIVE days now) because of this bum ankle!

I love that place. Besides the marathon, I try to get there at least twice just to "re-experience" it. I've never been there on a Wednesday night with the LPTR gang....one of these times.

Come on up to the Northern Kettles too! Some low-key events: www.greenbushtrailrunners.com