The last race of my running season, the Glacial Trail 50k, started with a text message and ended with a voicemail. More on the voicemail later.

I was up early on Sunday to get in a good breakfast and some caffeine (I'd only had decaf for the last month to make sure I got a good jump in energy from the real stuff on race morning). I had asked my parents (my crew) to be at my house at 7 AM, so that we could go over the course map and some other details. At about 6:50 I was dressed, had eaten, had packed some clothes to change in to after the run--it was going to be a soaker--and had gotten my gels and bottles ready. Then came the text message. Tony was wishing me good luck.

I thanked him, wished him good luck on his trail 10k he was running, and then commented on how it was going to be a mess out on the course (we had received about 3 inches of rain in 24 hours by this point and were going to get 3 more before Sunday night).

Suddenly the message came through: "Shouldn't you be lining up at the start?"

I ran to the computer, got to www.badgerlandstriders.org page and quickly got to the Glacial Trail page, and sure enough...The 50k starts at 7 AM. NOT 8 AM.

My one-word text message back to Tony started with an F.

I manage to grab my cooler of bottles and gels and was in full on sprint to my truck. Halfway down my road I flashed my headlights to my parents to let them know the bad news. I managed to make the 10 minute drive in about 5 minutes, slamming a Gel and taking off a layer of clothes in the process. As I pulled in to the Greenbush Town Hall, I can see the back end of the 50k field turning a corner up the road. I literally parked, dropped my cooler to the ground, asked my mom (my parents made pretty good time too!) to go get my bib, and told my dad I'd see him at Highway 67. I didn't even manage to get a good snug fit on my shoes, but I was off and running--HARD--to try and make up for about 5 minutes of time and to get in front of as many people as I could before the course picked up the single track trails that would make it tougher to pass on.

I didn't have a water bottle now for the first 7 miles. I only had one Gel in my pocket. Great planning!

About 4 miles in, I caught up to Todd E. from the LPTR gang and said hello. I explained that I'm an idiot and missed the start, and he said I was probably up to about 10th place now. Not bad, I thought, but I wanted to be in the top 5. This was the goal race I was planning for all summer...and I missed the start! Ugh!

By Hwy 67 (first aid station, 7 miles in), I was thirsty despite the fact I was drenched. The continuous rain was taking its toll, and it was only going to get worse with more rain and more people making their way along the trail. At Hwy 67 I got a bottle of CarboPro from my dad and kept plugging along. The course from Hwy 67 to Butler Lake (second aid station, 13.3 miles) is much more runnable (in my opinion) but also features the biggest hill of the course, in Parnell. At this point I tried to get myself into a bit of a rhythm. I had to get some calories in and had to find a way to save something for the return trip of this out-and-back course. In this section I caught Brian (also from LPTR) and stuck with him for a mile or two before moving past him. He was moving very well and let me know I was now in 7th or 8th. As we dropped in to Butler Lake, I was definitely feeling the effects of running too hard and dumping too many calories in to my gut too fast. Not a real good combination, when the race isn't even half over yet.

Leaving Butler Lake, all I wanted was some water. I asked my parents for my water bottle--not the one with CarboPro in it. Unfortunately, that water bottle was still in MY car at the start line. I had taken it out of the cooler to use at the beginning of the race, but forgot it in my rush, and didn't put it back in the cooler. Now, looking back, I could have just used the empty bottle I was carrying, filled it up at the aid station, and been fine. In the moment, though, I was too stubborn and in too much of a rush. So, off I went for the next segment (2 miles to the turnaround, then 2 miles back to Butler Lake) with only gels and SCaps, no water.

I passed another runner out of Butler Lake and was now in 6th. I soon caught up to another runner (Alec from Illinois, I believe?) who was running very smart. He was fast on the flat stuff and hiking the hills good. I yo-yo'd with him quite a bit, getting close enough to exchange some conversation, but never passing him or even getting side-by-side with him.

Finally, after nearly wiping out several times, I made it to the turnaround point in 2:03 (my watch, 2:08ish in race time). I downed another gel after turning around and even managed to swallow an SCap without any water. I do NOT recommend that.

Back at Butler Lake I got another bottle of CarboPro (400 calories in about 18 ounces of water, with a nuun tablet for flavoring) and headed out. The trail was markedly deteriorating at this point--even in the grassy section just north of Butler Lake. This section is about the only place on the course that one can see any considerable distance in front of him. As I left Butler Lake, I could see two other runners (Alec, and another) ahead of me on the trail.

As I have mentioned, the trail continually worsened. On a lot of the uphills, I wasn't even on the trail but hiking along the edges where grass and leaves provided some traction. In fact, along the flat parts I wasn't on the trail either, as that part had been run over by over 200 participants and was showing the wear. The Ice Age Trail drains really well, but it can only take so much, I guess.

Just South of the Parnell Hill climb, I caught Alec. He shared he had just tweaked his hip a bit and was 'shutting it down for a bit.' He still managed a finish which is incredible because I think that course would find and open up any weakness you had! So now, after that, I'm up to 5th. Still moving good but the combination of terrain, weather, and terrible pacing is starting to eat me up.

I last ran this event in '10 and can still remember how horrible I felt at Hwy 67, just wanting to be done but still having the toughest 7 miles of the course left. This time I had someone to chase--4th place--so I had some motivation. I finally caught 4th place at the Hwy 67 aid station. I also gave a kiss to my son, Edwin, who seemed to be loving every minute of the rain, splashing around with Grandma and Grandpa. I actually felt decent leaving 67 this time but still looked forward to being done. "Hurry up and finish," Ellie (my wife) quipped, "it's pouring out."

Leaving 67 the course is relatively flat for about a mile before it goes up a pretty steep and rocky hill near the Greenbush Kettle. I thought I was moving great and was really surprised when I was passed while hiking up this hill. I managed a "Great Job!" to the new 4th place runner, and decided I'd try to stick with him. That didn't last long, and he was out of sight once again.

Well, back to 5th place and now I'm a bit more motivated to get done without losing any more time. On several occasions I almost went down big time but managed to stay upright. Looking back, it wouldn't have mattered had I fallen down and gotten muddy--the constant rain would have washed it all away in no time.

The last 2 miles of the run are pretty much downhill or flat, ending on a road in Greenbush. I ran most of it (I hate to admit I walked some of the last mile, but I did) and finally turned the corner to the finish...only the finish wasn't there!

It turns out the volunteers were tired of the rain also, and had moved the clock, the awards, the finish line, and the coveted medal and 5th Place Cup to the canopy under the front door of the Greenbush Town Hall. What a day...

Looking back, I'm glad I made the best of a less-than-ideal situation, and I find myself even more motivated to go back and run strong at the Glacial Trail Race. I can't even imagine running the 50 miler--Dan Crouse is a beast. Also, Mike Henze (3rd place) wrote up a great recap here.

Special CONGRATS and THANKS to Tony Tushaus, who sent out the text that got me out the door to the start and also WON THE WORS 10K TRAIL RACE in Sheboygan that morning! 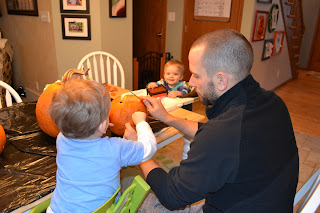 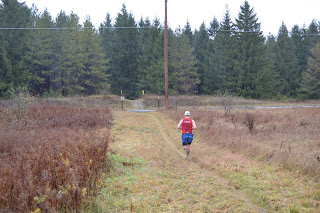 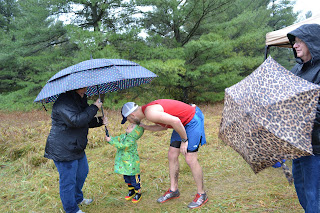 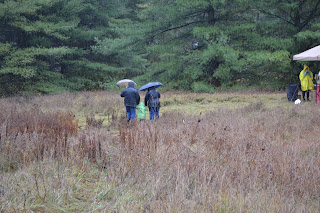 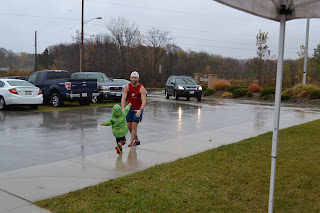 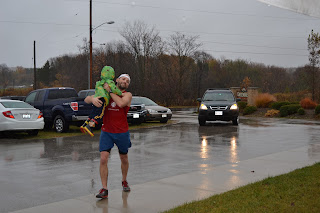 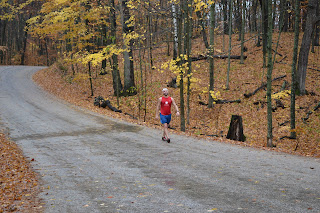 I'm not sure I'm reading this right, but did you seriously show up late to the race start and then finish fifth? WTF? I hate you. Congrats anyway. Great photos. Cheers!

Thanks, Viper! Yes, I somehow managed to think the race started an hour earlier than it actually did. Thank goodness it was a low key trail ultra...one in which I was able to pull up to the start and park about 10 feet from the start line, and tie my shoes then take off running. I dug myself a hole with some crazy pacing early one, but stuck with it. That course has now beaten me twice. I gotta go back.