This was a terrible horrible no-good pretty bad day.  But I finished.  I didn't quit...but I've never been closer to taking my first ever DNF.  I was even thinking to myself at one point, "Huh.  My first two runs this year were a DNS (John Dick) and a DNF (Ice Age).  That sucks."

But I sucked it up and walked it in.  4:41.  Second slowest 50k ever.  One thought that kept going through my head was the sound of my son asking me why I quit.  "Why you quit, Dida?"  Over and over I heard that, and I didn't have a good answer for it.  So I kept going.

Here is the Garmin Data.  While I felt barely okay on the out and back, I actually was running sub-8 minute miles on the beginning of the first 'Blue Loop' at Nordic.  Then, about 3 miles in, I hit the roller coaster hills, and they just destroyed me.  Chris, who I had run a decent amount of them morning within 20 feet of, caught me at that point and I told him I felt like I was on my second loop...not my first loop (let alone not even halfway done with the race!).  Not good.


Tony, who I drove down with, told me when he saw me at Mile 7 he thought I looked bad.  I know I was moving decent but apparently was already showing signs of fatigue.  Not good.

So, anyway...it's a lot more fun to write reports about solid efforts.  Heck, I wrote last year's Glacial Trail report in TWO parts because it went so well.  I don't know that I have much to add to this report other than to point to aspects of my preparation that I can improve:

1.  I need to hydrate more.  It hit 70 on Saturday and I was running out of water constantly.  I don't think that's a result of poor hydration the day before the race or during the race, but it's a result of several weeks of lackadaisical hydration habits...along with probably a bit too much beer.
2.  I need to be more consistent. I simply didn't RUN enough, and my thought that a decent base of fitness from basketball this winter would translate isn't true.  Running is Running.  Basketball is Basketball.  Types of Fitness are different.
3.  Should I run this race again?  I HATE training in the cold and dark, and that's when the base needs to be built for Ice Age.  Perhaps I target a June or July run as my first?  If I do that, though, do I just postpone putting myself in the pain cave and creating motivation for future races?
4.  This one is sticking with me...and I really hope I'm wrong.  The last time I felt this run down during a race or run was when I was coming down with Lymes.  About a week before Lymes really hit me hard, I remember being on a run and simply needing to walk because I was so wrecked.  I've also noticed recently that I've had an increasing sensation of stuff crawling on my skin.  It has been worse for about a week.  Stay tuned...I really hope I'm wrong on this one. 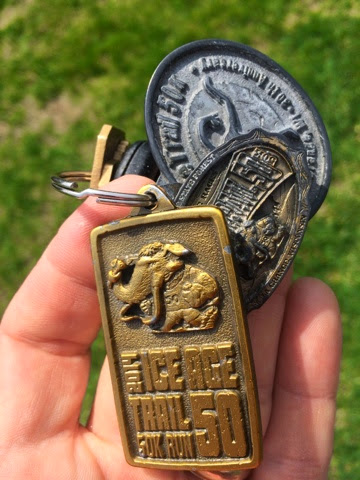 you finished tho' and in a very respectable time! i was volunteering at the 30mi mark with my son... sentry at hwy h about a mile or so before confusion corner. so i don't think i saw any of the 50K runners. i was only at the finish around 2pm for a few minutes and then i went home because i didn't see anyone i knew and my son was bored. lol! great job on the run!