Want to make God laugh?
Tell him your plans.

Add on top of that the fact that the St. Louis course is constantly rolling--much more than I anticipated--and I was happy to finish in 3:18, for 68th of 1900 finishers. Just under 3,000 runners were scheduled to start, but the weather forced the race director to close the course early (I wasn't even aware of this until we were checking in to our return flight and the TSA agent mentioned it). There were strong winds--25-30 mph the entire time--but they weren't cooling winds. The wind was as warm as the heat! This is my third HOT marathon (Grandma's and Fox Cities are the others), and it's always a battler, to say the least. This course is definitely not a PR course, either. None of the hills are as steep as the hills I run on normally, but they're constantly rolling, and they wear you down after a while.

My first mile was right around 6:50, what I needed to run under 3 hours, but I quickly realized I needed to slow down. I brought my pace into a more comfortable area and kept it there, deciding to make this a good training run for Ice Age. That decent rhythm lasted until...

I had a horrible patch from about miles 13-17. Ellie was waiting for me at miles 14 and 20, and as I worked my way through the halfway point, I had made up my mind to stop and drop when I got to Ellie. When I told her of these plans, she looked at me with a look I see often--"you're an idiot"--and told me I wasn't quitting. 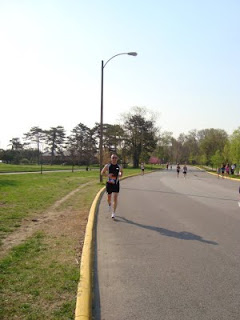 Fine, I thought. I'll just hike it to mile 20 and drop when I see her then. Miles 15-17 were terrible (splits of 9:06, 8:14, and 8:19), but I kept taking in salt, sugar, and water, and at about mile 17.5 a 3:20 pace group caught up to me. I hitched on to them, and Tony (pace leader) carried me out of that bad spot. I ended up staying with Tony for the last 9 miles, and finishing relatively strong. Despite some dry-heaving at about mile 26.5, I still was able to finish with a kick.
I keep thinking back to that bad spot, and how I was lifted out of it. I was worn down, ready to give up, feeling like I did at Grandma's, and a couple prayers and the thought of Edwin had me kind of tearing up. At that point, I figured, okay, I'll hold on to this pace group as long as possible, and it must have been the Gu kicking back in, along with the salt, and I was ready to run! I had to actively remind myself to stay calm, to relax my running form, and to stay steady. My mind wanted to sprint off from the group at a sub 7 minute pace, but by actively taking control and staying relaxed, I was able to hold a nice pace the rest of the run instead of crashing and burning at some point in the future of the run. 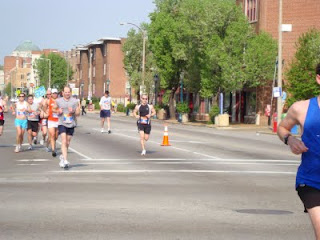 Mile 20, with the pace group. Yes, the pace is wearing a skirt.
It's difficult to explain exactly what I was feeling at that point but I won't forget what it was like. I thought I was DONE and broken, and I actually turned it around. "It doesn't always get worse." I hope to be able to push myself to that point once again and learn something from it in the future. I just hope it's not 80 effing degrees out. 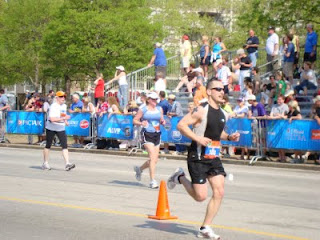 At the finish, "feeling it", post dry heave, pre medal.

My legs are sore, and I've got some killer blisters on my feet from all the water I was dumping on myself, but overall, it was a great weekend, and a great run...during which I learned quite a bit more about myself.

Garmin Data.
There was a great finish among the leaders, as well.
Here's a video regarding the heat.

Really nice time given the conditions. It is a tough rolling course and the weather was awful since everyone had been training in the cool.

I've run Go! twice (not this year). The first time I paced my brother for his first marathon and the second time I dropped out at mile 20 due to the heat and sickness. Not to good for the hometown marathon!

At least you got a training run for Ice Age.

When are you going to drop these road marathons and start focusing on the trails?

Stay on the wagon

Sounds like a tough day at the office Nic. It never gets any easier does it! Good mental training for Ice Age though - but will Ellie alway be there to push you on?

Brian - By the sounds of it, maybe I'll just be happy with my single finish and stay away from now on!

Matt - Yessir, my focus has immediately turned to Ice Age. One week of rest, then two weeks of tough miles to get ready. I just want to break three hours, and then I'd be done with the roads...

Grellan - Ellie won't be at Ice Age, BUT my crew will be a retired Marine. Probably not as tough as Ellie but a close second.

Nice work. Seems to be a good sign if you can do that well in those kinds of conditions, especially the recovery and turn around. Time to rock Ice Age!

Africa Mango -- Can It all Do the job http://www.canadagooseoutlet13.com/ http://www.abercrombiefitchcoat.com/ http://www.drdrebeats4uk.co.uk/ Which is a dilemma that you should checked out by way of professional together with must not be managed by means of the owner of the unit. canada goose jackets for sale abercrombie beats by dre When you read through my reason earlier mentioned meticulously, the AMP diet pill (1) increases stamina not to mention (a couple of) curbs hunger. Rates not to mention super-premium the rocks ointment comprise more extra fat. Complicated shells can be preferred. People use aftermarket automobile parts during several occasions. LDL can be often called unhealthy cholesterol. The ideal type of down it's possible to have on will be one particular which is light-weight understanding that could discontinue your wind.