Short story:  I finished in 4:53, took 5th.  I'm happy with the effort, considering I definitely underestimated the hills, and felt like I kind of 'quit' towards the end.  I lost a bit of competitive fire to keep working, which I'm disappointed in.  All in all, though, I ran a decent race, got a solid workout in, and can finally today bend my knees without a lot of pain.  Although I was cursing this race in the final hour, and after it...I'll be back.

After Ice Age this year, Tony and I both agreed that we shouldn't go to these races anymore alone, as they tend to 'wreck' us a bit, rendering us useless piles of flesh for an hour after the race.  Nonetheless, I went to this race going solo again.  I even tried out a new strategy for fueling.  I carried only a Simple Bottle and had a ziploc bag of Carbo-Pro in my pocket.  I started the race with about 300 calories of Carbo-Pro in the bottle, and then at aid stations I filled with some Coke or water and added some of the C-P from the bag.  It's hard to know how well this worked, as the humidity probably played a significant role in how I digested the calories, and how I slowed down at the end, etc.

Anyway, back to the race.  I drove down with Matt R., a patient/friend of mine who just completed his freshman year at Madison, is a true minimalist runner, is vegan, and is studying Social Justice and Chemistry in school, thinking about going to Med School at some point.  He's a character and a great conversation, and I really enjoyed talking to him.  Needless to say, when I was a freshman in college, I wasn't running 50k trail runs.  Or doing any of that other stuff that he is.  He's got a good head on his shoulders, that's for sure.

We arrived at the check-in (I've never been to an outdoor check-in before) and you could tell the 'vibe' for this run was pretty cool.  Lots of people camping out, lost of fun music playing, plenty of excitement building.  We met up with Matt L. at the hotel (three of us bunked out in one of the 'dorm' rooms at Devil's Head).  we chatted a bit about Hardrock and Kilian (who I claim is the greatest mountain athlete--any kind of mountain athlete--EVER) and how he was running that race like it was a local 5k.  Just crazy.

Soon enough, it was bedtime.  None of us slept all that well, but we slept well enough, and were up with the alarms at 4:30.

I had my standard breakfast of Muscle Milk, drank some water, band-aided my nipples, got dressed, and headed over to the start line.  We drove my car over there so that I wouldn't have to crawl back afterwards.  As soon as we got to the start/finish, I knew my shirt wasn't staying on.  It was already feeling muggy and considering the minimal approach I was taking to this run, I didn't want to have to deal with a shirt.  I felt kind of stupid walking to the start line shirtless--never done that before, and was surprised at how few other guys I saw opting to go shirtless--but just sucked it up and walked on over.  We found Dan the Man, Andrew F., Thao, and about 20 other of the good trail runner kinda people that make this community so cool.  I really enjoyed seeing everyone and catching up a bit.  Then, it was time.

Off went the starting gun, and I found myself making way through the first mile, probably in about 20th spot.  The first 5 miles meander their way up to the top of Devil's Head Ski Area, then we drop back down to the start/finish area.  I did a good job of hiking the steeper uphill stuff, and then really cruising the downhills, passing about 10 people, and came back through mile 5 in 39:44.  Up Next:  Parfrey's Glen.

Leaving for Parfrey's Glen, I was running with Jesse (?), who shared that he was doing the 50 miler, and that he trains on these trails all the time.  "Good," I thought.  Let's find out more.  He shared that we were about to make a 2 mile climb before topping out, then losing a bit of vertical before the next aid station.  My goal was to stay under control.   I hiked a solid amount of this and again lost a bunch of spots, but didn't bother me.  I noted that, while I would lose time hiking on the uphills, I was never far behind those who had passed me running, and it never took long to close back in on them when my running resumed on the flats and downhills.  I think in 50k's and longer, a runner is much more likely to lose time when they're not able to run the flats.  Races aren't won on the uphills.

After topping out at Parfrey's the course then drops down via a couple aid stations and a big loop to take you down to Lake Aid, which is right at Devils Lake.  This part of the course was very runnable, very fun, and I felt solid throughout.  I knew I had two of the five big hills done, and was still feeling solid.  Legs were decent, stomach was fine, just out for a run...but it was getting a bit muggy out.

From Lake Aid, the course goes UP.  Up on to the top of the east bluff of Devil's Lake, and this really took something out of me.  I was even a bit, dare I say, crabby with this part of the run.  I'm not sure why.  I was 15 mile in, I felt good, but I think the heat started to get to me a bit.  And I wasn't even sure where the course WAS at a couple moments.  I had no fellow runners in front of me or behind that I could see.  Eventually, each time, I found another pink ribbon and continued on my way.

Towards the beginning on the big downhill in to Bug Pit, there were a couple photographers taking amazing shots of the runners among the rocks and boulders. I really look forward to seeing those photos when/if they become available.

The down hill to Bug Pit was fun.  I took a major digger on the way down and slid about 5 feet on my right forearm.  As I type this, it's sore while resting on the desk.  I wear the scab with pride!  Coming back through the aid station after the turn-around point, I loaded up my bottle with Carbo Pro and doused myself with water, and started back up the hill.  One aid station worker noted that this was the muggiest DWD weekend he could remember.  Not the hottest, but definitely the muggiest.  After hearing that I poured another cup of water over my head, and it was off to go back up the hill.

I hiked the majority of the hill.  Any time it flattened out a little, I'd get some running in, but for the most part, it was a hike.  It was great to see all the other runners and friends coming down.  I noted that I was in 5th place at this point (thanks to the out-and-back), with about 4 minutes between me and 4th place, and 1 minute between me and 6th.  That was some motivation.  I decided that no matter how slow it was, running was faster than walking, and if I ran the remaining 11 miles when possible, I'd be top 5...and maybe higher, if there was some serious carnage up front.

The Bug Pit out-and-back ends with a right turn onto a gravel-like road.  It's a straight shot back to Steinke Basin Aid, and then a right turn for the Parfrey's Glen section back to the finish line.  I ran every step of that gravel road, doused down again BIG TIME (gallon of water poured over my head!), filled up with 1/2 Coke and 1/2 water, and was out of there as soon as I could be.  I didn't want 6th place to see me dilly dallying in the aid stating as he approached on the gravel road.

At this point, the course re-joins the 1/2 marathon course, so I was doing a lot of "on your right", which is not something I was thrilled to have to say.  At this point of the race, I'm in GRUNT mode and don't want to expell the extra energy to speak...something I need to work on.  I shouldn't be so negative.

The 1/2 marathoners were great, besides the ones wearing headphones who couldn't hear me coming.  I was constantly looking for the peak of the uphill.  At that point, it's 2 miles DOWNHILL to the finish.  Finally, after what seemed like an eternity, I hit the nice long downhill.  I'd like to say I bombed it...but not really.  My quads didn't allow it.  I've never been sore from downhill running, and I feel I'm pretty good at it, but this course really ate me up.  I figured 6th place was coming for me, too.

I didn't catch 4th, and 6th didn't catch me.  I ended up in 5th in 4:53.  The finish was kind of anti-climactic.  I stomped on the the timing mat, collected myself, then walked the extra 20 yards to the actual finishing area where I received my medal (a bottle opener!), a blanket for winning my age group (Edwin has already claimed it as his own), and directions from a volunteer to the nearest chair.  THAT felt great.

I had a bottle of water, some nuun, and then made my way over to the car, where I put down a blanket and used my new blanket as a pillow.  I could have slept for an hour right there.  What a great day!

I quickly decided I'd be back next year to work those hills better.  Had you told me I'd run a slower time at Devil's Lake than at Ice Age, I never would have believed it.  Yet, despite the slower time, I ran so much better.  I'm really looking forward to the benefits of this tough hill-oriented race at Marquette and Lapham in the upcoming months.  Bring 'em on!

Interesting stats on the varying amount of Vert for WI races (according to my Garmin 110): 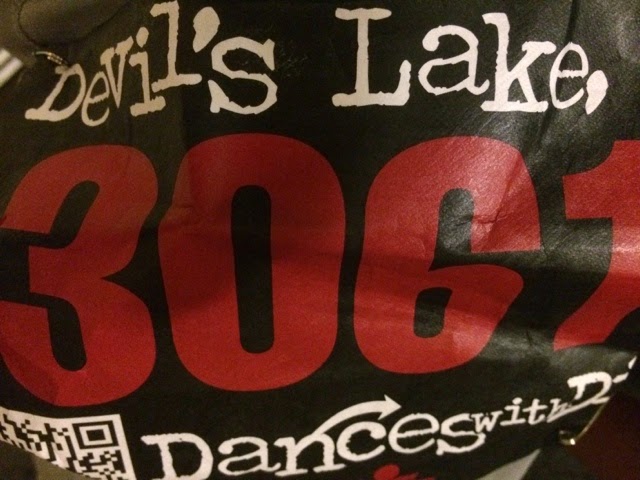 the guy you have a picture of... did he do the 1/2? i think i was running with him for some time. i think he was the guy i was bombing the downhills with! is that possible?

your race sounded like you did well... not sure why you had the debbie downer attitude. wish i would have seen you. although i was flying high the whole time which likely would have made you shoot eye daggers at me as we passed... lol!