The first race of 2016 is in the books...and I did something I've never done before.

I cut the course.

Unofficial results had me in second place in 4:13.  I was really happy with that time, and definitely went deep in to the pain cave in the last hour.  Upon finishing, I can remember thinking to myself, "Whoa...I must've been out of it. That last 30 minutes went by fast."

It went by too fast.  Apparently I cut about 1.5-2 miles off of the course by missing a hard left hander on the blue loop of Nordic.

If you look on this map right here, you can see where I errored.  I continued straight on the purple loop instead of taking the hard left and continuing on the blue loop...right near the "P1" and "W1" markers.

I didn't realize this had happened until a phone call from Jason Dorgan (co-RD) the following Sunday.  As he explained what the thought had happened, some foggy memories came back to me.  I told him that right around that part of the course, I was thinking that the grass didn't seem as beat down as it should have.  But before long I hit some orange flags again, and just continued on.

Jason was very friendly about it, and told me he was looking at the splits of the winner, and believes the winner did the exact same thing I did.  Upon reviewing Strava...he was right.

I've never done that before and feel bad about it.  I'm guessing my time would have been closer to last year's 4:27.

Outside of that ending, I really enjoyed how the race went.  I definitely felt better along the way this year compared to last year.  I had a solid nutrition plan, followed through, and overall, enjoyed the experience a lot.

I'll be back next year, for sure.  And I won't miss that turn. 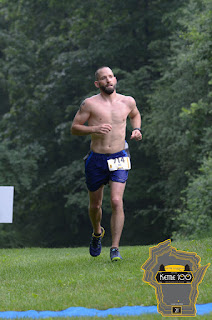 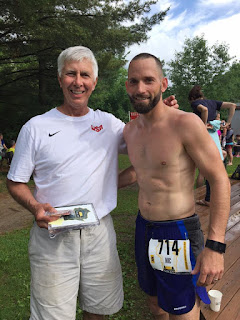