On August 5th I ran the High Cliff 25k Trail Run.  There was a super fast runner there who took off from the start in a full sprint.  I tried to keep up but it didnt take long and he was gone down the trail.  For the remainder of the run, I ran alone, in second place.  I never saw him again.  I would get updates from Edwin, Estelle, and Ellie on how far behind I was at each aid station.
"3 minutes."
"4 minutes."
"5 minutes."
Seeing a pattern developing here, I turned my attention to keeping a steady pace and finishing the race strong.  Eventually I made my way to the final aid station, with 2 miles to go.  Edwin ran up to me with a water bottle and said, "How did you pass him?"
Umm, huh?
"Yeah, you're in first place."
Considering I had never seen that first place runner, I guessed perhaps he went in the woods for a potty stop or maybe got lost?  No matter what, now that I'm in first, I don't want him to catch me!  So I took off and ran the final 2 miles hard, occasionally looking over my shoulder for an chasers.  As I ran, I thought of how great of a lesson this would be for the kids.  Keep working! Don't quit!  No matter the score, stay positive and keep working!  What a great life lesson they would learn, first hand!
I came to the finish and sprinted through, with my kids at my side...and was then informed that the aid station worker who told my son and wife that I was the first runner to come through...that aid station worker wasn't at the aid station yet when the real winner came through.  He was that far ahead of me.  Doh!
I, in fact, finished second.  9 minutes behind the winner.  So much for that life lesson...except for the fact that I DID keep working and trying, and my kids witnessed that...and once I bought them some ice cream they didn't seem to mind that Dad finished second, and not in first place.
Fast forward to August 19th, and I'm really struggling at my favorite race of the year, the Marquette Trail 50k.  I won the race last year in 4 hours and 40 minutes.  But this year, something I ate the previous night was wrecking me.  I had either thrown up or dry heaved 8 times.  I did a LOT of walking between aid stations.  And during those between-aid-station hikes, I told myself that once I arrived at the next aid station, then I'd drop.  I was done.  I'd quit.  I said that at Mile 16.  Then Mile 21.  Then Mile 25.  I'd walk in to the aid station...and then I thought about what I told Edwin and Estelle at the High Cliff race.  I decided I couldn't quit.  So I didn't.
Eventually, I did finish in the slowest time I've ever run.  But I finished.  I didn't quit.  Thanks for the life lesson, Edwin and Estelle! 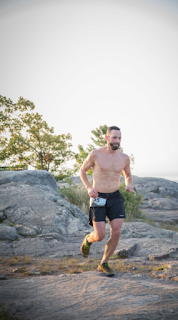