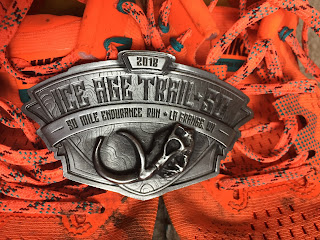 Last Saturday I completed my first 50 mile run of the year.  As you may know, I am running several 50 Milers as a fundraising effort for my friend Kim, who is battling cancer (See last week's "Neighbors" section for more on that!).  I had never run the Ice Age Trail 50 Mile and was excited for the opportunity.

For the first 40 miles I felt pretty darn good.  I was running a pace faster than I had expected and the weather had cooperated.  Earlier in the week the forecast called for an 85% chance of Thunderstorms all day.  Because I knew they wouldn't cancel the event, I was expecting a lot of mud and rain and cold.  Lucky for the runners, it only rained on Friday, and the trail on Saturday was better than expected, in terms of mud and slop and puddles.  My bright orange shoes still went through plenty of mud, but it wasn't all that bad!

Anyway, back to the run.  The first 40 miles went well.  When running that far, I focus on my breath (don't be breathing too heavy--that means you are working too hard), I focus on my feet (make sure my stride is light and quick and that I am minimizing the chances of tripping or jamming my toes on a rock or a root), and I focus on my stomach (am I taking in calories?  should I drink more water?)  At Mile 40 is an aid station, at which point you turn around and finish the last 10 miles by running back to the start/finish line.  In my opinion, that section of the course is the most difficult, with the most big climbs and descents and technical (rocky and rooty) trail.  I arrived at Mile 41 in just under 6 hours, averaging 8:46 minutes per mile up until that point.  Then...the first major mistake of the run occurred.

Knowing I had less than 10 miles to go, I didn't take much for nutrition and only filled my water bottle up.  I was in a hurry to get moving and try to catch a couple runners in front of me.  I figured I could just 'gut it out' to the finish.  Big mistake.

Within 2 miles of leaving the aid station, I "bonked."  My body had finally run out of sugar/energy/excitement, and whatever else I had been running on.  I could now barely...and I mean barely...climb up the hills.  Moving on "all fours" was considered.  As was just lying down on the side of the trail for a moment.  I went from running under 9 minutes per mile to now dragging myself along at 15 minutes per mile.  Miles 43-46 took me almost 50 minutes.

I actually called Ellie at the finish line at one point.  I told her to bring Edwin to the very last aid station on the course, at Mile 48.5.  That he and I could run it in together...some kind of father/son bonding moment.  I was D. O. N. E.

Then I had a thought.  Things are going really badly right now.  And if I don't try to fix them...they're not gonna get any better.  Nothing changes if nothing changes.

I still had my bottle of water.  I checked my other pockets and found one last packet of Tailwind Nutrition, which a powdery substance of electrolytes and sugar.  It was a Green Tea flavored packet.  Not exactly my first choice...but I might as well try it.  So as I stumbled along the trail, I poured the powder in to the water and then chugged it.  Worst case scenario?  I throw up...and then I may feel a bit better for a bit after that.  Best case scenario?  I feel better and get some energy back.  Either outcome is better than just moping along in self pity.

Down went the Green Tea Tailwind...and within a couple minutes, I was moving better again!  I actually was thankful when Edwin told me he didn't really want to run with me, as I was feeling like pushing it a bit!  Those final 1.5 miles of trail were the 'easiest' final miles I've ever had in a run!  In fact, my last mile was back under 9 minutes.

I crossed the line in 7 hours and 44 minutes, good for 8th pace overall.  Having Kim and her husband Bob, and my entire family at the finish made it even better and worth all the effort.

So remember...nothing changes if nothing changes.  Life rewards ACTION...not just MOTION.  Next up is the Titletown 8 Hour Ultra on June 30th.  Giddy up!