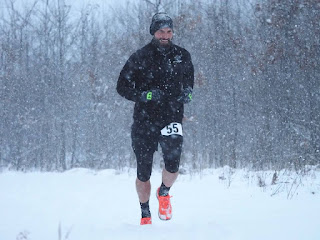 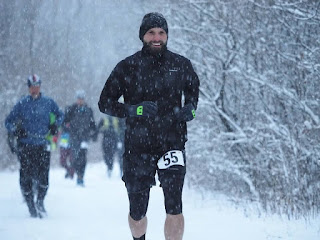 On New Year's Eve of 2017, I took part in the Inaugural "Run Your Past Off" 6 Hour Endurance Run at High Cliff State Park.  It wasn't my smartest decision, as the temperatures bottomed out at 25 Below Zero that night. The event runs on the trails of High Cliff from 4:00 PM to 10:00 PM, and by the end of the night, some layers of my clothes were literally frozen in to my beard.  My goal was to run my 'age' in miles (My birthday is December 30th), and in 2017 I succeeded.  Due to some fatigued brain function, I actually ran .5 miles beyond my goal, finishing with 37.5 miles on the night.  It only took about 15 minutes next to the roaring fire in the shelter to actually detangle my beard hair from my neck warmer upon finishing.

This past New Year's Eve, I returned again. Once again, I was hoping for my 'age' in miles.  I worked at the office that morning before running a couple errands (or, "aarons"...as my mother would say) and then heading up to High Cliff for the 4:00 start.  Leaving Kiel, it was raining.  By the time I arrived at Sherwood, it was snowing.  Heavily.  While it was very pretty, I actually had to move in to 4 wheel drive toward the end of the trip to get up the 'cliff' to the shelter (the one near the tower, if you've been to High Cliff).
It looked like once again Mother Nature was going to make this event...interesting.  At 4:01 we were off an running.  Well...not all of us, as some of the participants didn't make it to the start on time on account of the snow and road conditions and especially that road that goes up the big hill at the park!
It was just cold enough for the snow to remain snow...but plenty warm for it to melt pretty quickly.  For the first hour or so of running, I was constantly wiping my eye lashes and eyebrows with my gloved hands to remove the snow...and resulting in drenched gloves from the snow immediately melting.  Nonetheless, I kept moving, pretty much "post-holing" those first 4 or 5 miles through the snow.
Every 4 miles the runners would 'check in' and have their mileage verified before heading back out in to the woods and the trails.  By the second or third loop the course had been packed down by the participants, making the footing surprisingly steady, and allowing me to kind of look around at how truly beautiful it was out there.  It seemed every single tree trunk, branch, and twig, had been outlined in snow.  As the sun set and the snow continued, it only became prettier.
In addition to the 6-Hour even, there was also a 3 hour event this year.  I happened to be checking back in at the shelter right at 7:00 pm, and I was feeling some definite fatigue and I was also just flat-out WET.  It actually snowed steadily until about 9:00, so I only really had 2 options:  keep going to keep running and keep some warmth...or quit.
I'll be honest.  The thought of quitting was a pretty strong thought, especially when seeing all the 3-hour runners warming up and smiling and chatting.  I'm glad I still had the ability to weigh the consequences though, and one aspect that kept me going back out of that warm shelter was that if I quit...then I'd need to leave and drive home...and those roads were going to be terrible.  So, I might as well just keep running for another 3 hours, right?  Seemed logical at the time...
As the night kept ticking away minute by minute, I kept covering miles step by step.  I was even treated to some New Year's fireworks along the shores of Lake Winnebago below...and the trees and forests only became prettier.  Each time I was back in the shelter, I spent a bit more time in there warming up, trying to dry off my gloves or clothes, and grazing at the aid station food (RAMEN NOODLES--YUM!).
In fact, a bit too much time.  Eventually 10:00 rolled around, and I fell a bit short of my goal.  I finished with 36.5 miles--not my age of 38.  Then again, maybe I'll just tell everyone I'm 36 and a 1/2 this year!
The drive home was also an adventure.  The roads hadn't improved really at all, but I managed to stay safe and stay in my lane, and I was heating up some pizza in my kitchen when I heard a firework go off outside and realized it was midnight.
"Not a bad New Year's Eve," I thought to myself.

I haven't run all that much in 2019 as of yet.  Between those miles and then hovering my right foot over the pedals on the drive home, the top of that foot has been kind of sore.  I don't have any additional events on the schedule as of now, but I was happy to end 2018 at High Cliff and hope to return next year.  I can't say enough nice things about the event and would encourage any of your to consider it!  You don't need to run your age...or run for 6 hours...or even run for 3 hours!  In fact, some of the listed finishers tallied between 4 and 8 miles in total.  All you have to do is start.  You can stop at any time.  Just take an opportunity do something new and put a new twist on New Year's Eve!
Posted by nwgdc at 11:08 PM