This past Saturday was the Journeys Marathon. My legs have been heavy lately and my last couple runs weren't all that good, but I still felt like I had a PR in me, and after being named Blogger of the Week by Marcy, I knew I had to represent! I mean, if I was going to increase my readership at all, I should at least post something during this momentous honor, right? So I pulled it together and ended up with a great day!
But I'll be honest. I'm really not in the mood for writing a long report. Don't get me wrong...I'm really happy with my run (3:02:21) and happy with setting a 6 minute PR! I really want to write this report using bullet points (just to irritate Glaven, mainly) but instead I'll put a little bit extra work into it and use Picture Points: 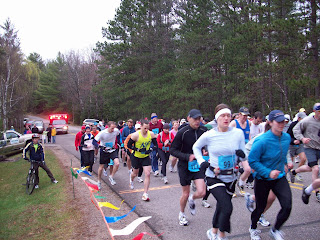 The start of the marathon was 26.2 miles northwest of Eagle River, at the White Birch Resort. The resort had opened up their lobby and provided coffee and snacks, which was a big plus considering it was 34 degrees out. I lined up somewhere in the middle, and after a gun sounded (fired by a politician, no less...insert joke here), I was off. Yes, I'm wearing the "ladies ballroom gloves" too. 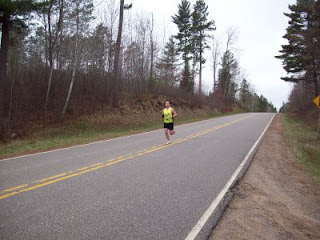 By about Mile 5, the field of 99 had been spread out so much that I could only see one runner in front of me, and zero behind me. I was running the first half (which contained endless rolling hills) as easy as possible. At Mile 13, the course leaves the very hilly county highway and starts its 'journey' over a bunch of roads that are all named after lakes. While it is a beautiful area of Wisconsin, these roads were pretty forgettable. With the exception, of course of the runner ahead of me, sporting jean shorts, going shirtless, and letting his shoulder-length gray hear flow in the wind. Parsenn couldn't believe someone was running in that either, and literally never even saw me as I ran past at this point. 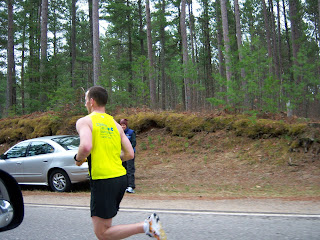 After passing Jean Shorts, he said "Congrats. You're now in 8th place." Really? The next time my parents came up to me, I asked them to drive ahead and find 7th place and time the split back to me. About ten minutes later they informed me I was roughly 5 minutes back. Considering it was about mile 21, I was going to need some serious bonking to occur on their part, so I just kept plugging away. I must have been feeling it a bit, too, as my mom asked at one point, "Nic, are you okay?" Between breaths, I managed to answer that I had just completed running 23 miles and still had 3 to go. So no, I was starting to feel a bit tired. 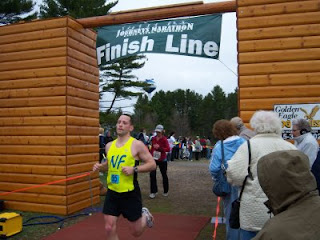 Due to a Garmin Snafu (more on that later) I really wasn't sure of my exact time for the event. I didn't know my first half split, but knew I was close to running the second half in under 1:30. At mile 24 I started to push it, seeing if I could sneak in under 1:30...and perhaps break 3 hours. My 24 was my fastest mile of the run (6:40), and just about killed me, so I decided sub-3 would have to wait for Grandma's, and finished strong. The picture above shows zero celebration, and I managed to even keep my eyes shut as I crossed, in 3:02:21. 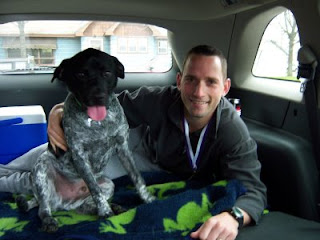 I celebrated a 6 minute PR with a single beer, and then it was off to the car. My feet were KILLING me. I ran in Brooks T5's...and there simply isn't enough shoe available for a marathon. My right big toe feels like the nail's gonna fall off, and the tops of my left toes are all blistered. The shoes worked well, though: I ran 3 events in them (Milwaukee Marathon, Dick Lytie Half Marathon, and Journeys) and set 3 PR's. Parsenn was also exhausted from a big morning. He needed a nap and a dip in the lake :) 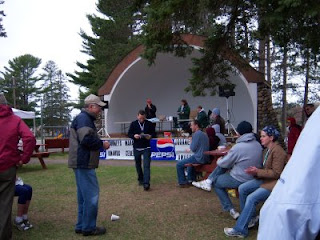 I had told my dad this morning that I wanted to run a PR and maybe even sub-3, and that I think that would put me in position to possibly win an award...and I did! 8th overall, 3rd in the 19-29 age group! 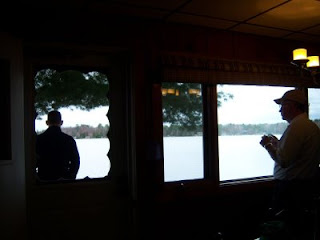 This picture was included for Ellie. She always tells me my (big) ears are "cute" and is especially fond of pictures which seem to accentuate them. I think this one qualifies! Perhaps the ears are the reason for the good run--we had a 10 mph tailwind the whole time :)
Posted by nwgdc at 8:01 PM

Congrats on your PR and 8th place!

CONGRATS Dr Nic! A super fine performance and 3rd place in your AG too?! Dang!

OMFG I'm dying over that pic! High fivers for getting that baby. Seriously, jean shorts?!? I hope he Body Glided his n*t s@ck (that's for G) is all I'm sayin . . . Good for you, putting him in his place ;-)

I never noticed your big ears until now so thanks for pointing that out :P I kid! You don't look like you have big ears to me.

Yeah, they're not as bad as they once were...my head has grown into them.

As for jean shorts...they were so short you could see the pocket sticking out the bottom. Classy.
If GQH ever runs a marathon (well, ever runs at all), I could see him sporting a similar look.

Congrats on the PR!

Congrats on the PR, Man!

Know how I decided to represent when Teh Marcy made me BotW?

By trying to make the term "n*ts@ck" go viral.

It didn't work. There are people out there - I see them all the time - who never use the word "n*ts@ck". It saddens me.

I would totally run in those jeans shorts. But not a marry because Teh 'Bride wouldn't let me!

Congrats again, Nic! I think the three hour mark is going down. (Personally, I'd be uncomfortable having someone named "mark" go down on me, even if his first name were "three hour" ... but I guess that's one of the many ways I'm different from you. Hahahahahahaha!)

P.S. Wow! Teh Marcy has SOME mouth on her! Really, Marcy? N*ts@ck? In mixed company?

Nice work bro! 3-hr mark IS going down in Duluth, hopefully it's not at Old Chicago in front of me;) John Maas will be gunning for sub-3 and my buddy Tom always wants to start at 3:00 pace. We'll create our own 3:00 pace group. You can draft me until I collapse in a heap and start drinking with the college kids along the course.

Damn, that's impressive. First, it sure was convenient that that resort was 26.2 miles away from the finish. Imagine the coincidence! Also, way to make the rest of us look like putz's by sleepwalking across the finish line after a 3:02. What's next? Moonwalking to the finish in 2:58?

Congratulations on a super PR! Goes without saying that those hills are to blame for the extra 2:21, but I think a sub-3hr marathon is soon to come. Well done! (Are you locked in with the Running Laminator or what?!)

3:02 is a really impressive marathon time! I see a sub-3 hour marathon in your future when you have more favorable conditions including a flat course, wind at your back, and an operational Garmin.

Great job on placing 3rd in your age category...Way to go!!

Congrats Nic on your big PR and great AG finish. You manage to run the exact same time I did in Boston this year. Crazy. Big Ups to you for a great race weekend.

Holy shit that was some running. You are in serious form considering the tough races you've had already this year. Grandma's will see the end of 3:..!!

I, on the other hand am revising upwards the way things are going :(

But will celebrate regardless!

Rock on! Grandma's gonna bake you up some under-3-hour cookies for sure! Them will taste good. At least I imagine they will. I will be gnawing on the mud brick of "a whole lot slower than that" for quite some time. :)

Congrats on an excellent time :) No freakin' problem on that sub-3 soon.

As for the jean shorts - I cry at the thought of THAT chafeage.

That pic of Parsenn looking at the denim cut-off guy is simply priceless.

Congratulations on a great race!! You set the bar...

Keeping you fastest mile until mile 24 just shows the strength and depth of your endurance. Sub-3 hours in Grandma's for sure!

The denim's bad enough, but looking at the photo again, did the guy have a mullet? Probably slowed him down doin' the achy-breaky at the aid stations.