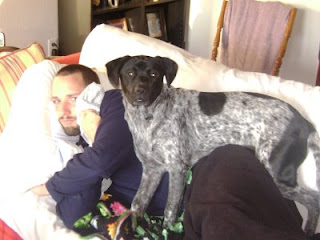 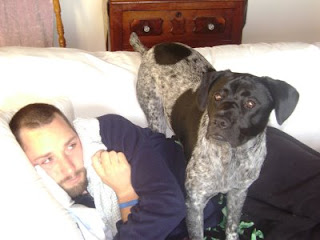 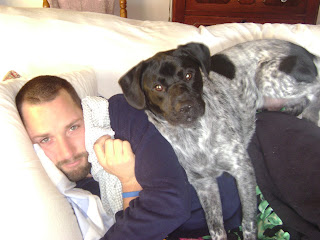 For clarification due to the resident Librarian's unattainable journalling etiquitte demands, I started this post on Thursday night. As I finish this part of the post (it's still Thursday night, but I need to stop writing because The Office is about to start and I need to un cap one of those Leinie's Nut Browns) I'm really not sure when I will post. Because of this, I will end this post with a Heisenberg-esque dashed line:

Well, now it's Saturday evening...and what a great day! Ellie and I were up early and off to attend yoga (her) and try out CC skiing (me) which I had never done. I absolutely loved it, although I'll be the first to admit my technique was lacking. To get an idea, think of the running form of Nitmos, and then extend his already gawky long legs with skis and extend his flailing arms with ski poles. Add CC skis and boots to my Christmas list...someplace immediately after a Garmin 405, but before a Leg Lamp. After some hot apple cider, I met another friend and snowshoed 4 miles of the Ice Age Trail. Again, absolutely lovely.

Just spending some time outside like I did this morning has invigorated my aspirations for training and exercising...something I was in dire need of. As of today, the events I'm training for this spring include this, this (maybe), this, and this. It's gonna be fun!

Wish I could grow a beard. At almost 39 yrs old I'm doubtful the thin areas will ever grow in.

Looks like you and I get to battle twice this spring! Have a feeling by next spring you'll be crushing me. Will be fun either way, looking forward to it. Staying at the dorms in Duluth is always a final option and isn't bad at all.

Much to respond to here, brother, but I'll attempt to do so without crashing your server with wuuurrrrrdzzz.

Not only did this post show up timed correctly, your word verification graphic displayed first time: "capot", which I think means "French Cap" which we in America now call a "Freedom Cap".

Did you perform some sort of chiropractic voodoo on your blog's chakras?

Love the concept of a beerd. To work with Teh 'Bride, though, I'd have to introduce the concept of the "anti-beerd", since she hates facial hair. And get THIS: It's because she thinks THIS FACE is handsome!

Brown ale - what a coinky-dink! I brewed up a stout yesterday, but I also have the ingredients for a brown ale which I intend to brew up today. So in a mere 2-3 months, I too will be drinking a fine brown ale hooch! WHAT ARE THE CHANCES?!1?!!1?

Sorry if that weird coincidence freaked you out.

Good luck on your upcoming races. I ran a 5k yesterday, on grass, and it nearly did me in. I have nothing scheduled, but I usually decide what to run last minute anyway.

Nice pix of the dog. Morgan, our dog, also likes to stand astride me to show me who's the b*tch in our relationship.

I have to look at RazZ's Rosie O. post (Shhh! Teh 'Bride LURVES Rosie!) I thought his (i.e., RazZ's; because "his" could also mean "Rosie's") "I'm All Man" post was hilarious! More hilarious: The fact that no other men would back him up.

Danielle in Iowa in Ireland said...

I heart cross-country skiing! If anything, it makes you extra super excited when it snows!

I ran Grandma's. I wish it hadn't been so dang hot! Gees, I go to Duluth for mild weather!

And I think my brain would explode if I had to run an indoor marathon...

Dogs help out in funny ways.

Dude, I love that you are so
all
over
the
place.

I need to find a marathon that will surrender a sub-3 next year as well. Any suggestions?

A indoor marathon sounds odd. I could imagine it would have a confining feel to it. If you do it I'll be interested in your thoughts.

My gawky long legs just mean less steps than others to get to where I'm going. At least, that's how my mother comforts me.

An indoor marathon is beyond comprehension. No thanks.

This suggestion is probably too late (re: your comment), but I would drink cognac. Warms the cockles. Enjoy your trail run.

What a post! I love the stream of consciousness, but what I find intriguing is Grandma's. I am seriously thinking of doing it myself. I believe the signup starts 1/15 and I know it fills really fast.