I can't say enough thank yous for the kind comments. I never saw myself as the kind of person that would get that attached to an animal, but it certainly happened and shook me up a bit. As I had mentioned though, while it wasn't fun to witness, at least I was there to hold Lilly. And while I still don't really know exactly what caused it, if I had come home to find her dead I may have wrongly accused our dog of foul play (there was quite a bit of blood). So all in all, I chalk it up to a learning experience and have also gained a perspective on how precious life is...especially human life. Thanks again!
Parsenn was incredibly sad for a couple days also. It was eery how different he and our other cat, Grace, were acting over the last couple days. Parsenn had a genuine look of concern when looking at me lately, so I've rewarded him with some great runs on the Ice Age Trail this week.

I think I'm walking a fine line here, but I'm going to set the bar relatively high for my run at the Lakefront Marathon this weekend: 3:10.

I haven't done nearly as much speed work as I probably should this summer, but I still feel strong and have run easily and pain free lately. But still, I think I'm tempting fate on this run because my last two runs have been surprisingly great. In both of them, I didn't think I would run that good and did:

As I mentioned earlier, my runs this week have been from 2-5 miles, all on trails. Running on the Ice Age Trail really isn't a great idea this close to marathon (sprained ankles likelihood HIGH), but I really love the trails, especially when running with my dog. Add to that a new section of Ice Age Trail has opened nearby, and I couldn't resist. I'm taking Parsenn out there again today.
So, there you have it. This has not been a normal training cycle. I used a marathon as a training run for Milwaukee. But I want to BQ, and I'm sure as hell gonna try!

I think this card is fitting: 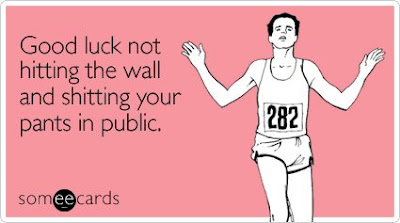 Dude that ecard is the best!

I'm sure you'll do fabulous this weekend ;-)

LOL that is hilarious. GOOD LUCK this weekend!!!! you will totally rock it!

Sorry to hear about Lilly. We lost both our goldens in the last year and half and it is really hard.

Best of luck in the marathon and I actually think you are going to surprise yourself.

I really like that card and I agree. You're tempting fate by setting the bar so high, but fate needs tempting every once in a while for greatness to appear. BQ is definitely in your sights. Got get 'em.

LOVE the card!!! Gool Luck this weekend. It is a tough goal but it sounds like you have every chance of making it. Sometimes the less conventional training seasons are the one that throw up the best results.

Lily on the Road said...

I love the ecard, too funny!

Leave a lung on the pavement and go rock your race!! Good Luck, have a fabulous race!

Sorry to hear about Lilly. And GOOD LUCK this weekend!!

Those cards are awesome!

Go for the 3:10. You sound like you are really in great shape right now despite the summer setbacks. Confidence is high! The legs will follow.

Losing a pet is like losing a member of the family, so I feel your pain.

The ecard is great! You'll totally rock it, and will "probably" not shit yourself :)