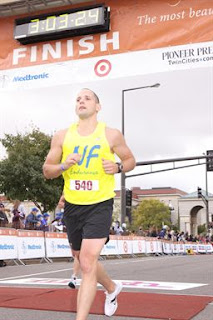 I'll be honest. I don't really want to write this report. I may resort to bullet points, just so you know.

Short Story: I was on pace through 21 miles before fading pretty badly. I still had a chance when I saw Matt at 24, but simply couldn't hold it together. I ended up running 3:03:05 and am very sore. The two marathons were too close together, and I made some tactical errors in calorie consumption (not enough) during this race, mostly because I was afraid of taking in too much and having my stomach revolt like it did in Fox Cities. I'm not sure at this point if I'll try to hit the sub-3 again. 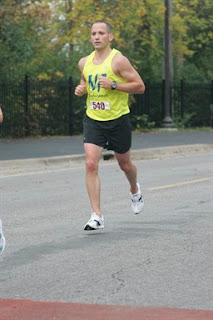 Finally, Summit Street! The left turn at Mile 21 marked the final climb and final home stretch, and I decided at this point to turn off my Garmin and run on guts. I really didn't need the psychological blow of watching my average pace creep bit by bit. My dad and bro-in-law were waiting at 23, and I mustered a grimace masked as a smile. Still, though, I felt like I had a chance...I was running on fumes and the minor hills were growing with each step.
I heard Matt yelling at me for a half mile before actually reaching him. He was spot on with his assessment that I still could do it, but had ZERO room for error, and needed to run a faster pace than I was currently running. I faked a puking episode as I passed and smiled. All I wanted was to see the spire of the cathedral. The previous day's run had shown me that when it becomes visible through the canopy of trees of Summit Street, the course opens up and it's downhill.
As I continued to go into serious hypoglycemia, the chimneys of the massive houses lining Summit kept duping me into thinking I was at the Cathedral. I. Was. Done.
The crowd along Summit was AMAZING. The best crowd I think I've been around. There were dozens of radios, several bouncy houses, and an absolutely fantastic NF Endurance Cheer Section. Without Matt and the crowd and the NF section, I may have walked it in from Mile 23 on. What an amazing event.
FINALLY, I was into the downhill finishing chute (the best finishing chute around) and had made it! 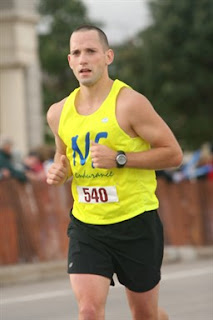 I didn't hit my goal of 2:59:anything but instead came across in 3:03:05. I was tired, but the fantastic spread for the runners helped a bit. Kurt was there, too, waiting on Sonya, and I told him I didn't get "it," (sub 3) and that I had run way too many marathons this year. He agreed.

Some chicken broth in my belly really hit the spot, and right away, there was my dad, calling my name and smiling. He asked how it went, and when I shook my head, he just kind of shrugged his shoulders, and smiled. "That's still a hell of a run, Nic." Great point. Love that guy.
There wasn't much time to pout, thankfully, as I had a ride to catch and a sister to run with. We walked to University Ave (other side of the Capital, uphill...that sucked) where my bro-in-law picked us up, and immediately headed back up the course on Summit St. My dad and I hopped out of the car just past Mile 24 and waited for my sister. By this time, I was freezing, so I put on my "Finisher" shirt, inside-out, of course, and was only standing there about 3 minutes before Kathy came by. She was off her 3:45 pace by a couple minutes, but was still doing well. I hopped back in and ran the final couple miles with her. As we went back through the NF Cheer Section, I was raising the roof and doing other dumb white guy stuff to embarrass my sister (who also runs for NF), and unfortunately caused her to have a bit of an asthma attack. Not the first time I've set a human into an allergic reaction with my dance style. After a short walk break, we started down the hill and into the finishing chute, where Kathy took off and left me kind of hobbling in behind her. THAT was the finishing sprint we were both hoping for!
And now some stray bullets.
Posted by nwgdc at 11:01 AM

Teh Dad says it all.

I kept looking at the 3 hr pacing chart on my blackberry and compared it to real time. When I saw your jersey I knew you were right on 3, and not less. That is why I yelled so loud.

At that point, you were only a few minutes behind Joe Z, Bryan P, Erik K, and John Akins. All pretty damn good runners.

Storkamp had left everybody in the dust, and still had a smile.

I was thinking racing 2 marathons so close would be tough. At least ultras you are not dealing with having to run so hard for so long.

Hey, you beat Ann Heaslett. That's something to brag about. Although, she was passing people like they were standing still at 24. She didn't look the least bit in pain.

You are to be commended for running 2 marathons in such a short time span and regardless of the time outcome you ran with your heart and great will and determination and thus deserve kudos!

I am sure you have a 3 hour marathon in you, but alas figuring out the GI system, having perfect weather and the right course on the right day are all variables that you cannot control. But in the meantime enjoy your marathoning and savor your very impressive finish time and finish stats.

I hope your recovery goes well!

I really enjoyed your race report. That is a ridiculously speedy pace. Congrats, and keep on reaching for the sub-3:00...not today or tomorrow, though, okay?

Also, I might just have to check out that book you recommended. The title alone made me LOL and LOL. FU, indeed, small, adorable animals.

Hey Nic - great run - again! Probably a bit close to Fox cities your legs still had those miles in them. But definitely close enough to know you can do it. Maybe you need to hire out Joe Z for the next attempt! He was pacing Brian Peterson who finished just ahead of you at Chippewa.

Hope you are recovering well - for the next one! Unfortunately it looks like I'll be cancelling the NF race also... I need to just stop signing up for things!

What a run Nic!! That NF cheer section was awesome! :-) I told my fam to watch out for a speedy guy in a NF shirt looking for a sub 3. Unfortunately they spent the day chasing down a 5 hr runner. You did awesome and glad to hear you enjoyed the TCM!

Wow!! You are an amazing runner. I love reading your race reports!!!
Great race!!!!

I'm still reeling over the fact that I was shorter when we met before (guess I really do have to work on my posture)! Didn't know chiropractors earned enough to eat at Murray's (and yeah, the steaks are amazing. Tied with Ruth's Chris). The book you found is based on a website I discovered long ago - it is funny, in small doses.

You paced the race right, and I think you might've done sub-3 even after the other marathon, if you hadn't been training hard the week before. I don't understand fueling being an issue in a marathon, though, as I've done all my best without even water.

Don't try again this year to break 3. Your mood shows you've dug a hole and it will take time to get out of it.

I think your brother-in-law and I may be a lot alike. Wait. Kathy? Is his name Don? I might know him! He might be the one who told me about the Mystic Trail!

Great run! 3:03 is a time most of us can't even effectively dream about, much less reach so it is an impressive accomplishment.

Great run Nic. I suffered a similar fate 2 years ago, albeit at a slower pace, where I did not take on enough fuel and suffered big time over the last 4 miles (positive split of about 8 minutes).

I reckon you should take on as much fuel as your stomach will allow. I'd be interested to hear what your fueling plan was/is?

Perhaps the biggest problem with my fueling plan is that is isn't one.

At Twin Cities, I took a Gu before starting, then Shot Bloks at 45 mins, then part of a Gu at 1:45. No Powerade (I was afraid of Powerade...I've never drank it), and sips of water at every other aid station (about every 4 miles).

I've run 2:30 training runs with very little outside of water and been fine. I think the best plan for me is one similar to Fox Cities...it just got a bit hot at the end, and I'm terrible in the heat.

Hell of a run, indeed.

Hell of a runner, too. Awesome job!

That IS a hell of a run! You JUST ran a 3-hr marathon less than a month ago.

You look strong in your pics. I'm very disappointed about the lack of lady evening gloves though :(

Your dad is right. Seriously a great effort. Especially for having run too many marathons this year. Rest up ang target the next one. Congrats.

Yea that was me at mile 7.5ish or so. Man you did great. Like we talked about after the race, If you realy want that sub 3 you need to limit yourself in the number of races you are doing. I know you can do it. Just a matter of time.

An early on research completed in the College with Cameroon with 50 obese topics divided within a pair of categories demonstrated a substantial difference regarding the Irvingia gabonensis Draw out and placebo. http://www.canadagooseoutlet13.com/ http://www.abercrombiefitchcoat.com/ http://www.drdrebeats4uk.co.uk/ It's also sensible to talk to your general practitioner about challenges for hypertension or simply heart ailments expertise may be issues. canada goose abercrombie and fitch beats by dre w not. Several Common Guidelines to Decide upon the ideal Make of Cameras Mango Needless to say Cultivated Together with Got. Many people, which include a number of our pals, feel comedians are created amusing and then for some reason become a organic, shiny, extremely funny entertainer. If you find yourself venturing out with the halibut fishing areas you may well be to the backside deck belonging to the charter boat, usuallly each day. The things you should just do will be to find these products it's essential to seeking for the top value it is easy to afford to pay.