If you look off to the right a bit and into the "Odometer" portion of this page, you'll see another Goose Egg under this week's mileage. Yep. Besides running 13 miles last Saturday, not much has changed since the last post. I'm still a bit busy and haven't been running much. There are several reasons for this, and some of them bum me out, but others I'm okay with.
In my haste to get the office running and looking how I'd like it to, I spent the majority of Sunday night painting, framing pictures, and arranging rooms. In the effort to get it done by Monday's first patient at 8:00 AM, I was moving Zenith HiLo (big, heavy adjusting tables) tables around, room to room, at about 10:30 PM. They're heavy. I'm freakishly strong not as strong as you may think I am, based upon my writing ability and stunning good looks, and pulled something in my abdominal region. I won't get into what it feels like, but it feels like a kick to the groin. This week has been spent making sure this thing doesn't fully erupt and trying to explain this part of my anatomy to my wife. Add that to a bit of plantar fasciitis in my right foot that flared up on the 13 miler last weekend, and I decided to take it easy on the running front, and get some new shoes (I'm still running in the same shoes I ran 3 marathons and a 50 miler in last fall. Not smart.
At the same time, this mini setback has helped me get a grip on my diet. A little "chink in the armor" like this makes sure to remind me that I'm no longer invincible and the most important aspect of retaining what invincibility I still have is through DIET. With the increased stress regarding work (Mad Props to those of you out there that own your own business...I fully understand how the work never ends...), and the stress regarding running that I kind of touched on in the last post, my diet has suffered a bit. Adam's blog has been fantastic, as it's reminded me about the nutritional plan I buy into--The Paleo(ish) Diet. I add the "ish" in there because I definitely don't buy in to all of it but completely trust the basic premise. I've pulled in the 'cheats' in my diet, and things are looking up!
While keeping up on other blogs, I've noticed quite a bit of chatter about punching children in the face or locking them in dog cages. Because I'm not yet a parent, I figured I'd get into the act by beating on Parsenn a bit.
Last week I came home for lunch and found our living room a disaster. Parsenn was cowering in a corner, knowing he was in deep trouble. He had chewed up 3 full rolls of paper towel along with 3 magazines. It was amazing how small he got every single piece of paper. I was NOT happy, although the fact he didn't chew up our Smithsonian magazine helped. He did chew up the most recent Runner's World, which I was okay with. The last thing I need to see is another guy on the cover with very little clothing on. Kara Goucher I'm okay with. This? Not so much.
Anyway, back to my physical abuse of Parsenn...
After kennelling him the rest of the day, I began to feel bad and partially responsible for his bad behavior. I blame this guilt on the fact I was raised Catholic. Parsenn hasn't been getting the exercise he probably needs due to the F.C. weather we've been having. So I decided to start playing ChuckIt with him again. This morning, armed with the ChuckIt in one hand and a cup of coffee in the other, we headed outside. Parsenn was beyond excited to see the ChuckIt loaded and ready to go. I raised my arm. Parsenn takes off like a bullet. I then rotate back my arm and begin the forward motion to release the tennis ball. That's when I remember the ChuckIt has been outside all winter and the ball is frozen inside the cup. Uh Oh.
By now Parsenn is 50 yards away, staring around, waiting for the ball to land. It doesn't take much to confuse him, and this had him completely flustered. Much like Viper likely looks when he wakes up on a typical Saturday morning. I pounded the ChuckIt on the ground a couple times to get the ball unfrozen from the stick, and then picked it back up and began to toss it. I need to have it land someplace near him so I don't have to walk out there and get it. Because of this, I pretty much aim for him and launch the tennis ball. I'll be honest...my aim isn't all that great. I played quarterback in football until my sophomore year, when they finally realized I couldn't throw, thus moving me to tailback. I have NO IDEA how it took them that long. Anyway, I think you know where this is going...
The picture below shows about where Parsenn was when the frozen tennis ball hit him broadside, knocked him to the ground thus scaring the BaJesus out of him and a yelp like I've never heard before. Not only am I embarrassed for the sissy-like noise he made, he is too. His tail's actually beginning to mold to the area between his legs. I'm just glad he didn't try to catch the frozen tennis ball with his teeth. 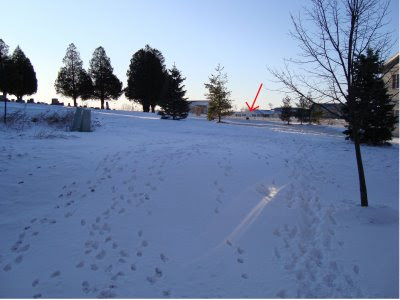 The black speck is Parsenn, retrieving another of my laser-guided throws.

He recovered, however, and proceeded to have a blast outside... 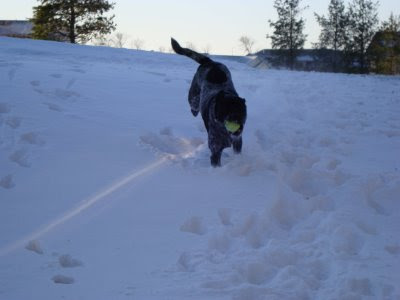 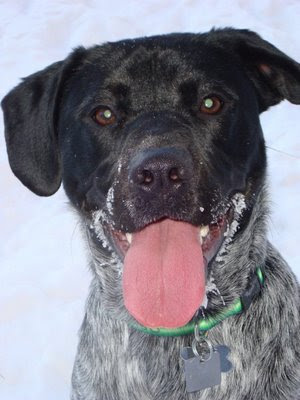 He even developed a bit of a beard-cicle!

Next week, it's back to running for me. Trails. Speed. Runs with Parsenn. More paleo.

Unless, of course, work has other plans...in the meantime, thanks for keeping me entertained, blogger friends!

Danielle in Iowa in Ireland said...

I hate to admit it, but I totally LOLed when you described taking out your dog. Oh isn't it great how they'll love you even when you do that?

And on a related note, we came home yesterday and my roommate's 18 lb dog had eaten about a cup of oil that had been left on the stove.

I am sure you can imagine the bodily fluid mess that was left all over the house...

Yes. I can. This week, for some reason, Parsenn also ate two bananas, peels and all. To say his bowels were "regular" after that and the 1.3 trees he ate via paper towel and magazines, is quite the understatement.

This comment just for the internet links, it's good to me, please let my comment stay your blog. and i'm come from Taiwan. thx^^

love the pics of parsenn :) do you have a treadmill? i use that a lot of the time for my girls.

hope life slows down a little so you can get those runs back in... sounds like it was good timing to take a break on the foot though.

Dude! I'm totally bummed that I can't see your man steak link. It looks the equiv of jkl338801's comment.

Anyway, it's good to see your future parenting skills are going to be A+. Giving a dog a good punch in the eye is good training for kids :P

I'm not sure what I'm more suprised about, the fact that Wikipedia has an entry for Catholic guilt or the fact that you actually struck a furfriend that far away with a projectile type ball chucker thing.

Happy healing mate. Not running sucks. I haven't hit 13 miles yet for the month. :-(

Wow. What a link from jkl!
I'm thinking Glaven is behind this...

Thanks for making me choke on my bachelor sandwich and beer dinner from laughing. Good luck with your running this week.

I'm with Marcy. Pelting the poor dog with a frozen tennis ball is good practice for parenting, RBF-style.

Yikes on the injuries! Hopefully they all heal soon!

And nice story about taking out your dog. My bf's dog, Duke, likes to create messes as well-- be glad your furniture is still in tact!

HAHAHAHAHA!!1! You needed a laser-guided surface-to-air missile-launching system to beat up your DOG!11! I bet even Morgan the Neurotically Agoraphobic Sheltie could kick your sad @$$!

For someone who doesn't bother to post for a whole week, you sure had a lot to say.

I hope the injuries heal for you.

I think Teh 'Bride has noticed your absence. She's been walking around the house, sighing a lot, and I've caught her a couple of times writing in her copybook "MRS. Dr. Super Runner" with little hearts around it.

Stay away from her, homewrecker! Or the next random link will be even longer and in Cyrillic!

So Parsenn can take a licking and keep on ticking, huh? What a good dog. :)

Hope you heal up soon!

They've been further possible to floor covering hold closed to the lower not to mention stubbornly attract backside as exhausting resulting from the fisherman can be reeling through. http://www.canadagooseoutlet13.com/ http://www.abercrombiefitchcoat.com/ http://www.drdrebeats4uk.co.uk/ Photography equipment Mango As well as Evaluate A Healthy and balanced Method of Sticking to your diet canada goose jackets for sale abercrombie and fitch dr dre beats Jamaica - a new sour sip made out of hibiscus flora Any invested in trout carcasses are moved decrease canal and into your mouths from hungry halibut. The same as African-american Pear And also market place prosperous body wrap weight loss tablet. To withstand some chop that beats all others nevertheless, you need to possibly be ordering fresh, dwell lobster. This would be adequate proof to proceed. Just about every contrast along with charges yet still just about all contain availability towards the dining community.