I think Friday night, which I posted a bit about here, can be best summed up by the following:


After a busy Friday at the office and a long trip to get to St. Louis, and a big weekend of running ahead of me, I was tired and looking forward to sleeping...and dreaming. (I know, it's a stretch to incorporate the above video's song title, but my weekend song theme is gonna get worse...)

I was up at 7:30 and excited. I showered, hydrated a bit (should have a LOT), and walked around the hotel for a while. It's in the middle of a corporate park, so there wasn't much to see. I did notice a couple charter buses out front...but they looked more like something a group of red hat ladies would tour in (you know--clean, no dark tinted windows, no whirlpools, no drug paraphernilia), so I really really hope that Cheap Trick decided to take their charter helicopter to St. Louis, and it was parked somewhere nearby.


At about 10 AM I began my first run of the weekend:

Not long into the run, I remembered two things about running in St. Louis:


Okay, I remember 3 things. As you can see, I ran a little over 6 miles each direction from one side of the Missouri River to the other, where the expo was held at the Ameristar Casino. The entrance I took into the casino was a wee bit less inviting than the vehicular entrance: 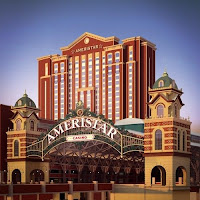 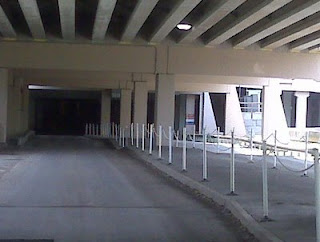 The above ground entrance, and the entrance I took in.

Surprisingly, I was not mugged, and it was actually cleaner than the bridge over the river I crossed!

Once arriving, the expo was pretty nice, including 15% off pretty much all the stuff there. This marathon gets a thumbs up from me for the stuff, including some free beverages that really hit the spot for me before I left to run back to the hotel. "180 Sports Drink" was tasty and easy to digest, so it gets a big non-compensated endorsement from their friends at left-right-repeat.com. And as a side note, I like how much their logo resembles the Boy Band "Hanson's" logo.

On the way back to the hotel, I passed through a park downtown where Lewis & Clark (and their dog "Seaman") camped upon completing their Journey. 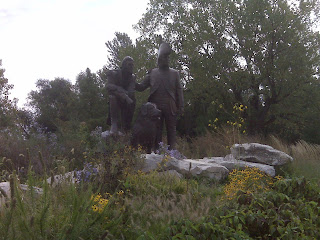 I also passed another race finish line--A stage of the Tour of Missouri bike race. Unfortunately, the peloton wouldn't be arriving until 4 or 5 PM. Still, the area was really festive and inviting. I think I should buy a bike. It looked like fun, and I wouldn't have been nearly has uncomfortable as I was running at that particular moment. 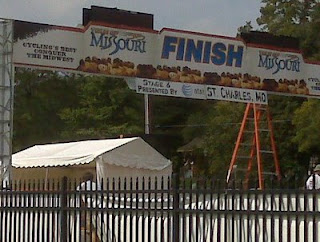 Then it was back over the river via Highway 370 (which is part of the marathon course tomorrow). This was NOT FUN. I was on the same side as the traffic so I pretty much heard semi trucks barreling down on me over and over again. 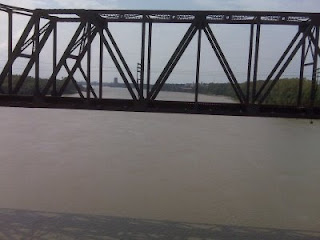 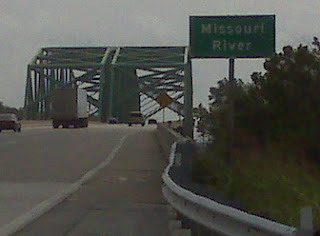 Back over the Missouri River. In the first picture you can see the Ameristar Casino in the background, behind the train bridge. It's not the greatest photo, but at the moment I was freaking out about dropping my phone off the edge. :)

I was running in what was marked as a "bike route" but was nothing more than the shoulder. There was trash everywhere (including, but not limited to a lawn chair, a case of Bud Lite, a wig, and a ticket to an adult entertainment venue), and it was humid as hell. I ran this bridge at what felt like a 6 minute/mile pace. Then I stopped, exhausted, and took some self portraits to see if I looked as crappy as I felt. Apparently I did. 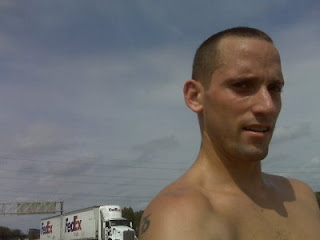 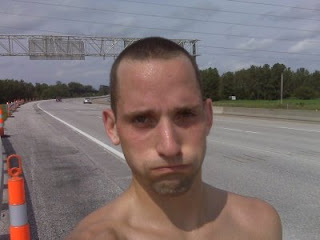 Feeling like a FedEx semi is about to blow me off the "bike path," and then breathing a sigh of relief it didn't. The orange cones will be used tomorrow for the marathon, I'm assuming/hoping. Did I mention the humidity?

I finished the run up in 1:42, for a pace of 8:13 overall. I'll take it. But by the end I had completely "Surrendered" to the humidity and had some cramping going on in my hamstrings. Thus, Saturday's theme song:

What's even better about that song is that I only knew it once the video started because of the video game "Guitar Hero," which I'm terrible at. Surrender is the only song that I can make it through without getting boo'd off the stage. Thanks, Cheap Trick!

I slept fantastic on Saturday night and woke up ready to go when the wake-up call came in at 5:00 AM. "Good Morning," a friendly female voice recording said. "This is your 5:00 AM wake-up call. The forecast for today is Sunny with a high of 92."

"That's odd," I thought. I was pretty sure the forecast was for an 80% chance of rain and heavy wind and...oh yeah...flash flooding. I got up and went to the window, pulled the curtains back, and discovered it raining so hard it was actually coming in my room. So much for 92 and Sunny.

After my customary shower and Breakfast of Champions, I arranged a ride to the start line from a Hotel Shuttle. Talking to other runners in the lobby that morning, the consensus was:

So into the van I went, wearing garbage bags around my feet, my legs, and my torso (I cut a hole for my head.) I arrived at the start line at about 6:00--wayyy too early. Without any shelter to take, I literally sat in a porta potty for about a half hour to stay dry. Finally, knowing the race was scheduled to start at 6:45 AM, I left my hidaway (no, there wasn't anyone waiting to use it) at about 6:35 and headed for the start line.

Now, I had read about this race on marathonguide.com and noticed that last year they started the race about 30 minutes late because the traffic was so horrible getting in. Keep in mind that this event starts at an outside music venue with about 6 lanes of traffic entering it from 2 different directions. Surely that problem was taken care of this year.

We didn't start the event until around 7:10. It was absolutely miserable standing out there, huddling under a broken umbrellaand shivering like crazy. Still, two things were unbelievable--the extent of rain and wind coming down, and the amount of people still there, in the same boat (ha) as me. Pretty crazy!

FINALLY, a guy in a poncho and a pony tail came running past yelling, "Go!" And almost immediately I was feeling better. The first 7 miles were into the wind, and it really was crazy to run in that. At about Mile 8 we crossed the Missouri River (see bridge above) and that was absolutely nuts. I remember looking at the people running in front of me and noting how they were all running at a 45 degree angle. Crazy!

After crossing the river, things calmed down a bit and I was pleased to see I was running about 7:30 miles. I had seriously contemplated dropping out at the half but decided against it at this point. Then, suddenly, a guy on the side of the road said, "Everyone finishes just ahead." That sucked.

I finished, got my HALF marathon medal, and got another can of 180 Sports Drink. That stuff is amazing! My time for the 10 mile fun run was 1:21, I think. The finish area really was soaked, and apparently there were trees and tree branches falling on the course route, so there really wasn't a choice to be made. There are some pretty cool videos here.

This weekend, it's on the the Fox Cities Marathon for this guy, and I'm really excited to get started with 1month100miles! Please help out if you can--it's going great so far, with a little of $1,000 already raised! In the meantime...

Dude...that sounds extreme! Too bad it got cut short, but at least you've got a make-up race right behind it.

I think you'll do fine for your first 50 - end this talk of being doomed!

I decided to do mine the week before the race and finished just fine...you'll be much better trained and it will be just like running two marathons back to back...no problem! Nothing is impossible.

Whoooooaaaaa Momma! Since when did you become the naked runner? :P ;-)

PS I hate you for those songs. They're prob going to be on "repeat" mode in my head for the rest of the day. GAH! LOL

wow that just sounds intense - both days. sucks the weather was so bad and they had to cancel it :( at least you have another one planned for next weekend!

Yikes...sounds tough! I lived in St.Louis for a few years and had contemplated doing this one--glad I'm headed for KC instead!

All of this global warming is sure ruining a lot of good marathons. Soldier on...left foot, right foot, repeat...well, you already get the idea.